The Whitstable Oyster Fishery Company traces its roots back to 1793, but oysters have been a part of Whitstable’s history for far longer.

The Romans loved Whitstable oysters and documentation proves that they were sending oysters back to Rome in around 80AD. Over the centuries that followed, oysters came to define the town where nearly the entire population was involved in the oyster business.

These days, the Whitstable Oyster Fishery Company supplies both wild Whitstable Natives (Ostrea edulis) and the cultivated Pacific Rock oysters (Crassostrea gigas) to the public, the Trade and, of course, their own celebrated restaurants. The Company’s freehold beds are directly offshore from the town and are world famous for the quality of the oysters that they produce. The Pacific Rock oysters are farmed either in bags on trestles in the intertidal zone. The Natives are fished wild from our own, and common, beds off Whitstable.

The company history began when The Company of Free Fishers and Dredgers of Whitstable was formed in 1793, becoming the Whitstable Oyster Fishery Company in 1895. This company still owns the beds on which our oysters are now produced. The plaque commemorating the firm’s establishment can be seen on the Royal Native Oyster Stores Building, which now houses the renowned Whitstable Oyster Company Fishery restaurant.

The glory days of the firm came in late 19th century. At its peak, around 1865, there were more than 100 boats and around 80 million oysters were being sent for sale to Billingsgate each year. In Victorian times, oysters were a key part of the diet of the everyday family, especially in London. They were cheap and nutritious.However, the decades following this peak would not be kind to the oyster trade. Several severe winters, over-fishing, pollution and the arrival of introduced diseases with imported stock resulted in the demise of the industry. By the 1960s, the industry was in severe decline and, by the mid-seventies, there was just one remaining employee of the Whitstable Oyster Fishery Company. This old dredgerman, Bill Warner, believed that when he was gone, so too would the company be. Fortunately, however, the Whitstable Oyster Fishery Company did not itself sink beneath the waves. 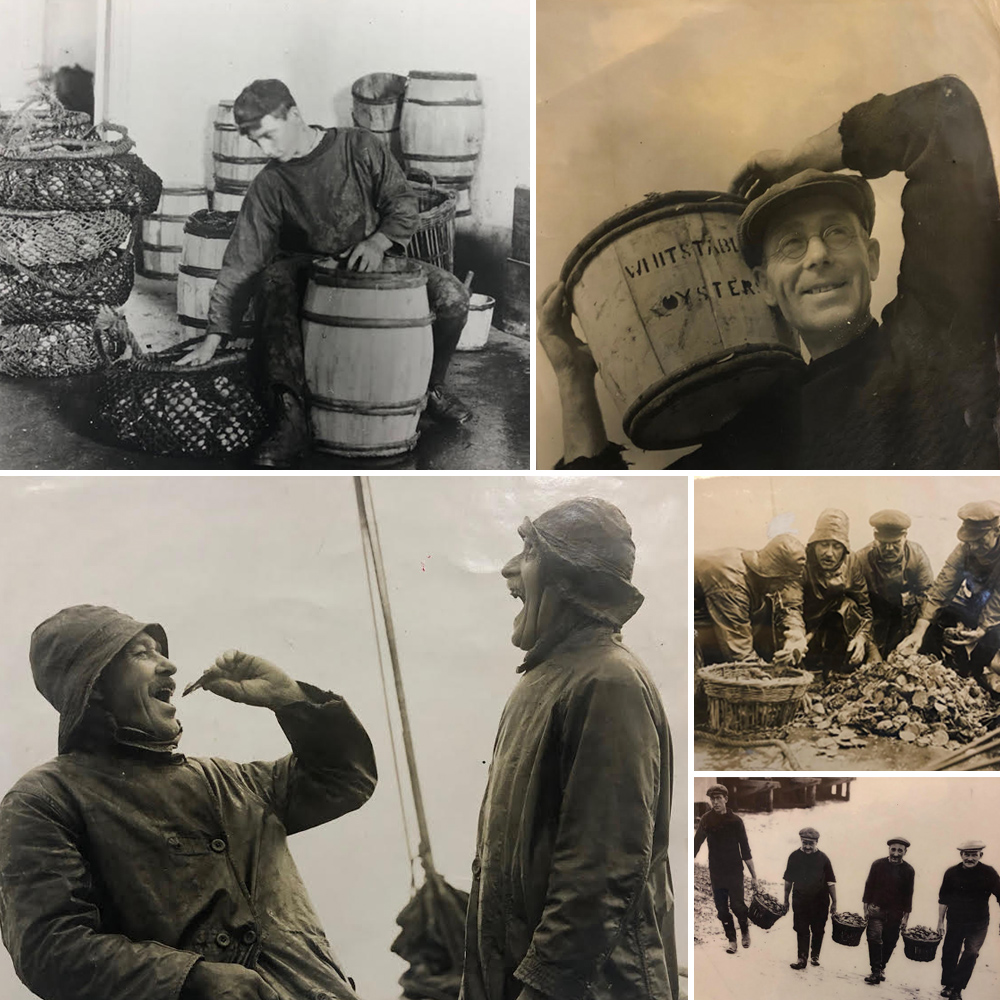 In 1976, the company was acquired by Barrie Green and John Knight with the profits from an enterprise selling wallpaper and paint. It was not until 1986 that his sons Richard and James Green started the task of refurbishing the main building, opening a tea room and restaurant in 1988. This developed into the now well-known Whitstable Oyster Fishery Company fish restaurant. Accommodation was soon added, initially in the form of converted fisherman’s huts, and then with the purchase of the Hotel Continental which opened in 1997. Whitstable was attracting more and more visitors and the company’s reputation and business grew. After purchasing the East Quay premises from John Bayes of Seasalter Shellfish, the company turned towards oyster production again in 2001 and, in 2002, the company’s ship Misty headed out to their beds to dredge oysters for the first time in over 50 years.The company was back in the oyster business.

Demand for oysters was growing quickly and new technology meant that a return to farming them was not only viable, but necessary to fulfill a growing demand. The first oyster trestles were put out in 2009 and soon 200,000 seed oysters were placed out in them. In 2018, production has been increased so that 6 million seed oysters will be put out to grow into the famous Whitstable Oyster way toward and goes some way to rekindling this important industry for Whitstable. In 2017, the company supplied oysters to the U.K. and France where they are in constant demand due to their provenance and quality.

In 2018 the company agreed to take over the reculver oyster hatchery site from Seasalter Shellfish whose managing director John Bayes was keen to see the hatchery continue to operate. This will mean that ultimately we have control over all aspects of producing our oysters and will make the oyster business truly sustainable.

The story of the Whitstable Oyster is far from over!

Interested in trying our Oysters?   Buy Online Find out more